A must visit allure for Chinese tourists and skiers 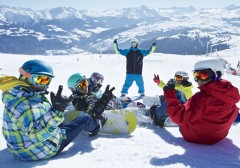 LAAX is the largest winter region in Graubünden, Switzerland. It is located in the Swiss Alps and is currently voted as Switzerland’s best Ski Resort for 2013 and 2014 from World Ski Awards.It is constantly expanding its range of products for visitors. Three brand new chair lifts, one of them designed by Porsche Design Studios, were built less than three years ago satisfy the guests’ quest for innovations. From this winter, LAAX will have the largest permanent half pipe in the world. Also from next year, a Gondola designed by Pininfarina will make its debut. Apart from new extended slopes, the resort has also introduced a LAAX + booking portal, where fans of winter sport can always obtain the best prices for day lift passes.

Families and freestylers are accorded top priority at LAAX. They will be exposed to attractive accommodation, a unique ski school for kids, ski and snowboard courses for all ability levels and a broad range of freestyle offerings. The beginner area, with its snow park, is unique in the Alpine region. This is where beginners can make their first attempts to ski and snowboard, at their own pace or with professional instruction, on the prepared slopes. LAAX proves that winter sport means more than just skiing and snowboarding. 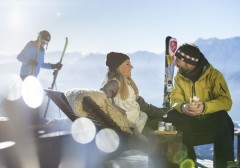 Winter sports are experience and relaxation, adventure and escape, enjoyment and companionship, sport and style. This is precisely why LAAX stands out as the largest inter-connected winter sports region in the Swiss canton of Graubünden. The destination, consisting of the Flims, Laax and Falera villages, are used for brand positioning of the winter and summer programmes. In winter, it is known as LAAX and in summer, it surfaces as Flims.

This resort is managed and operated by the Weisse Arena Gruppe, which is an integrated service company dedicated to provide unique Alpine experiences. Its group Chief Executive Officer and visionary figure behind the meteoric success of LAAX, Reto Gurtner, summarized the business activities of the group to include the following:

more than 29 mountain lifts (several gondolas, high-speed chair lifts, 235 kilometres of ski slopes, 5 hotels, a variety of restaurants and bars on the mountain as well as in the valley, ski and snowboarding school

We employ more than a thousand employees during peak season and in comparison with other large winter destinations considered as the biggest full service provider in the Swiss Alps.

LAAX offers boundless freedom on 235 kilometers of slopes, in four snow parks and in the biggest half pipe in the world. Seventy per cent of the slopes are at an altitude of 2000 to 3000 meters.

Only ninety minutes by car or bus from Zurich Airport.

LAAX is one of the regions in the Alps with abundant snow for skiing and snowboarding from early December to the mid of April.

Global Operating Environment - “More than 3000 over foreign-invested enterprises have been established by from more than 60 countries, including 112 Fortune 500 companies.

This Swiss wonder is continually improving the infrastructure in the mountains for its winter sport enthusiasts. In 2011 LAAX laid the first foundation stone for the multistage, large scale "Revolution on the Mountain” project with its opening of the Alp Dado 6-seater chairlift. Sustainable expansion of the ski region continued in the 2012 and 2013 seasons with two new, state-of-the-art six seater chairlifts. Guests can take their ski equipment and snowboard up the mountain faster and with greater comfort.

An absolute design highlight is a world exclusive - the 6-seater Lavadinas-Fuorcla Sura chairlift, designed by Porsche Design Studios. The chairs automatically rotate by 45 degrees at the exit point, by means of a pivot in the mounting attachment. This gives passengers an unhindered view of the breath-taking mountain panorama. The heated seats of the new designer lift, powered by solar panels, provide even more comfort. All the wood used for the new lift systems comes from the local region.

Beginners are fully catered for in LAAX. The special “LAAX for beginners” programme teaches beginners the important basics in ski and snowboard course and they are able to have fun on the slopes from the very start. The 4-hour beginner course includes professional tuition, a one-day lift ticket, rental equipment and lunch together on the mountain.

It has programmes for the first time skiers as well as for those who desire to improve their techniques.

There is a suitable course tailored for everyone. Initial experience can be put to the test in the beginners' snow park. In this place, winter sport fans can expect a range of different obstacles of varying difficulty levels over a length of 300 meters. Visitors can find the best offers for day lift tickets in the LAAX + online shop under plus.laax.com.

LAAX is so varied that it is more than just a winter resort. It is an exciting sunny holiday destination where everyone can find his or her joys and adventure. For young freestylers there are 4 snow parks. It has the world’s largest half pipe and international events. Skiers and snowboarders can enjoy 235 km of perfectly prepared pistes, suitable for beginners or those with more experience. Families too are well catered for by its varied range. 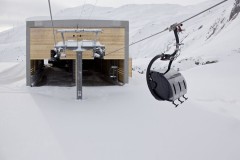 LAAX is Europe's leading freestyle resort. There are 4 snow parks in all, including the unique freestyle piste and the largest half pipe in the world, so beginners and professionals can find the perfect park. The freestyle snowboard elites come together every year to compete at the Burton European Open.

European Open is for the title in the super pipe and in the slope style. The European Free Ski Open also brings international competitors to LAAX. There is plenty of fun and entertainment with many events and concerts during such events. The atmosphere during such events is diverse and it promotes a young and dynamic lifestyle. Such competitions and facilities do result in the nurturing of World and Olympic champions. LAAX will induce Winter sports athletes to come for training. Mr. Gurtner remarked: “All the less it is surprising, that stars and testimonials like Nicholas Muller (Rider of the year 2013) or Iouri Podladtchikov (2014 Winter Olympic gold medalist, Half Pipe) were and are training regularly in LAAX. After the construction of the Olympic slope style run with 4 kickers, the first 200 metre long and biggest half-pipe in the world would be completed this year”.

LAAX makes it easy for families to enjoy exciting and relaxing holidays. The Snow Wonderland is a unique skiing school centred around the magician Ami Sabi. In this magic wonderland, the children hear stories, sing songs and learn a lot about the forest, the animals and the mountains. They also have great fun learning to ski. Up-and-coming freestylers can enjoy the snow parks and the Freestyle Academy. There are crèches for small children. This means that parents can enjoy some time on their own, on the piste or just fun time together.

LAAX is already the number one ski resort in Switzerland and probably one of the very best in the world. Mr. Gurtner and his management team do not rest on their laurels. Their mission possible will be to create an all-round training base camp in LAAX for the ambitious Chinese Olympic talents. He concluded aptly:

Ideal training facilities for the Chinese freestyle Olympic talents by offering one of the world’s best training facilities and infrastructure, such as the first indoor freestyle academy and to set a solid foundation for Chinese athletes to be on top for the upcoming Winter Olympics in 2022, hopefully in China”. 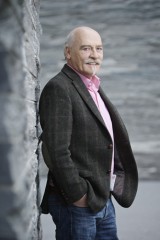 By Editorial staff of www.chinasymposium.com